skip to main | skip to sidebar

Nobel Prize in Peace 2006 to Dr. Yunus and the Political Economy of Poverty Alleviation through Microcredit 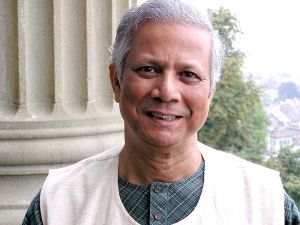 The Nobel Prize in Peace 2006 has been awarded this year not to any political prodigy of this crisis prone world rather than to an economist from a developing country, Dr. Yunus jointly with his organisation, Grameen Bank (Rural Bank by meaning) for their contribution in alleviating poverty in rural Bangladesh, comes as a surprise to many of the political analysts. The Norwegian Nobel Committee (the peace award is given from Norway) by this selection recognized, as it says, the wider perspective of peace, long after they award it to Mother Teressa in 1979 for her benevolent social work in Indian slums. The committee mentions in its announcement that for peace to be sustainable in a fragmented society, poverty alleviation is essential. In the third world where poverty is the fundamental cause of social conflict and political unrest, alleviating poverty should be considered as the best peace-making effort in deed. But how can we alleviate poverty in a sustainable way ? In a profitable way (please think carefully, poverty alleviation in a ``profitable`` way) ? Where poverty centred programs usually mean some sort of subsidized programs or just transferring wealth in a redistributive manner, is it possible to alleviate poverty out of subsidy and charity? Can it be a profitable business ? If not, who will finance for it? Can we implement poverty alleviation program in a cost-efficient way? Without corruption and without socio-ethnic-gender bias?

Dr. Yunus and his Grameen Bank answered these questions in a positive way 30 years back from today. Let’s see what are their prescriptions to solve the fundamental issues raised above.


Poverty Alleviation: A Business, Not A Charity

Grameen Bank doesn’t offer any subsidized program to alleviate poverty at all. What it does is to offer a small loan called micro-credit amounting from 1000 Tk to 15000 Tk (125 USD to 2000 USD) that is collateral free. Traditionally poor people are out of the banking credit system for the lack of collateral. They are poor, they lack tangible assets fit for collateral, and so are not credit worthy, very simple ! But they are the most credit needy. One small loan can change one poor’s way of life.

Grameen Bank does not require any collateral against its micro-loans. Since the bank does not wish to take any borrower to the court of law in case of non-repayment, it does not require the borrowers to sign any legal instrument. Although each borrower must belong to a five-member group, the group is not required to give any guarantee for a loan to its member. Groups of five prospective borrowers are formed in the first stage and only two of them are eligible for, and receive a loan. The group is observed for a month to see if the members are conforming to the rules of the bank. Only if the first two borrowers begin to repay the principal plus interest over a period of six weeks, then the other members of the group become eligible themselves for a loan. Because of these restrictions, there is substantial group pressure to keep individual records clear. In this sense, the collective responsibility of the group serves as the collateral on the loan. Loans are small, but sufficient to at least start the micro-enterprises undertaken by borrowers like: rice husking, machine repairing, purchase of rickshaws, buying of milk cows, goats, cloth, pottery etc. The interest rate on all loans is 20 percent. The loan is to be repaid on equal 50 weekly instalments, started from the 2nd week of getting the loan. For 1000 Tk loan thus the borrower has to repay 20 Tk as principal plus 2 Tk interest per week. The question remains like: how realistic is that to start repaying the loan just in the 2nd week? How realistic is group forming? Is there any self-selection among the group members? Will the group like to include the poorest of the poor in their group and thereby risk their loan?

Anyway, whereas conventional banks are owned by the rich men, Grameen Bank is owned by poor borrowers who are mostly women. While the overriding objective of the conventional banks is to maximise profit, Grameen Bank’s objective is to bring financial services to the poor, particularly women, to help them fight poverty, stay profitable and financially sound. Borrowers of Grameen Bank at present own 94 per cent of the total equity of the bank and the government owns the remaining 6 percent. At present it has 6.61 million borrowers, 97 percent of whom are women. With 2,226 branches, GB provides services in 71,371 villages with a staff over 18 thousand employees, covering more than 80 percent of the total villages in Bangladesh.

The success of this approach also shows that a number of objections to lending to the poor can be overcome if careful supervision and management are provided. ‘For example, it had earlier been thought that the poor would not be able to find remunerative occupations. In fact, Grameen borrowers have successfully done so. It was thought that the poor would not be able to repay. But in reality, the repayment rates reached were 97 per cent. It was thought that poor rural women in particular were not bankable. The numbers say otherwise, they account for 97 per cent of borrowers today. There has also been a shift from agricultural wage labour, which is considered to be socially inferior, to self-employment in petty trading. Such a shift in occupational patterns has an indirect positive effect on the employment and wages of other agricultural waged laborers. Many think it as ‘a small bubble of hope’.

In another difference with normal banks, ‘Grameen Bank branches are located in rural areas, whereas the branches of conventional banks usually locate themselves as close as possible to the business districts and urban centres. One more thing to consider, the first principle of Grameen banking is that clients should not go to the bank, rather it is the bank workers who will go to the people to make loan and to collect the loan instalment payment and the deposit. This is particularly important in a society where women are usually not considering outdoor activities as their own and there are restrictions on women moving out of their homes.

Furthermore, from 1995, Grameen decided not to take any more donor funds. Since then, it has not requested any fresh funds from donors. Last installment of donor fund, which was in the pipeline, was received in 1998. Currently, Grameen Bank finances 100 percent of its outstanding loan from its deposits.

Bangladesh receives its independence in 1971 after a blood-shaded independence war from Pakistan. The country not only defeats Pakistani Army in the battlefield but also has to overcome the most powerful political lobby headed by US-China in the world diplomatic arena. The mass people took arms to fight against an organized Pakistani Army. After liberation, they were just looking for ``freedom``: freedom from misery, hunger, illiteracy, malnutrition, poverty and much more. The new government were trying hard to rebuild the war devastated country. But nation’s expectation was so high to its architect, charismatic leader Sheikh Mujib. Disappointed Mujib moves in a dramatic way, taking socialism as the new policy in 1975, declared minimum requirement of every citizen is state’s responsibility to ensure. But he was given no time, within six months, a section of Army assassinated him with his whole family. State policy changed by the military government, moving very fast to the market economy. The poor freedom fighters, who hoped for a better society free from poverty and hunger, saw the changes as the change in the colour of their hope.

Dr. Yunus, a freedom fighter, and his experimental Grameen Bank project, initially funded from Ford Foundation USA, comes forward in this perspective in 1976. Prof. Yunus sets up models so that poor people can secure financial services from a Banking channel specially designed for the poor. This is not a charity, remember, rather than financial services like making credit and mobilising savings from the poor. This is particularly noticeable in the then 1970s when all over the world poverty alleviation program was mere a charity, and still like same. The success of the experimental project catches eyes of the major international donors as well as domestic government. Grameen Bank is then finally founded in 1983 with their initial and continuing help. The Bank is expanded quite fast and is able to attract a good number of poor people within its services.

Why did Ford Foundation and other International donors come forward to finance such a revolutionary program like this who were not helping Mujib just couple of months ago in fighting poverty and the famine in 1974 ? Many of the Bangladeshi intellectuals think that there are inter-linkages between these regime changes, policy changes and in the changes in donation. To many, this was the decade of communist revolution all over the developing world (including Afghanistan, Uganda, Chile, Libya, Iraq, West Bengal of India, Bangladesh etc). A lot of young specially from poor farming family, and from the middle class, were joining to the revolutionary groups. A poverty driven program was very essential for the world capitalists to curb poverty and to check the outflow of the young’s to these groups thereby. And if this comes in a profitable way, without any charity rather making money instead, that’s simply fantastic! Dr. Yunus lights that candle in the right time to them!!

Nowadays, Grameen Bank model is replicated to almost 28 countries all over the world. Fighting poverty in a profitable way is expanding quicker! Microcredit Foundation has been established in USA to promote its activities world wide. The big corporates like Citi Bank NA are now investing in Microcredit program, not for charity but to make money! Poverty alleviation through micro-credit and making profit as well!!
Why not Nobel then ? 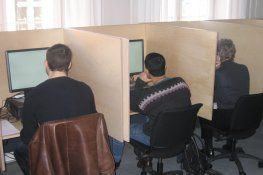